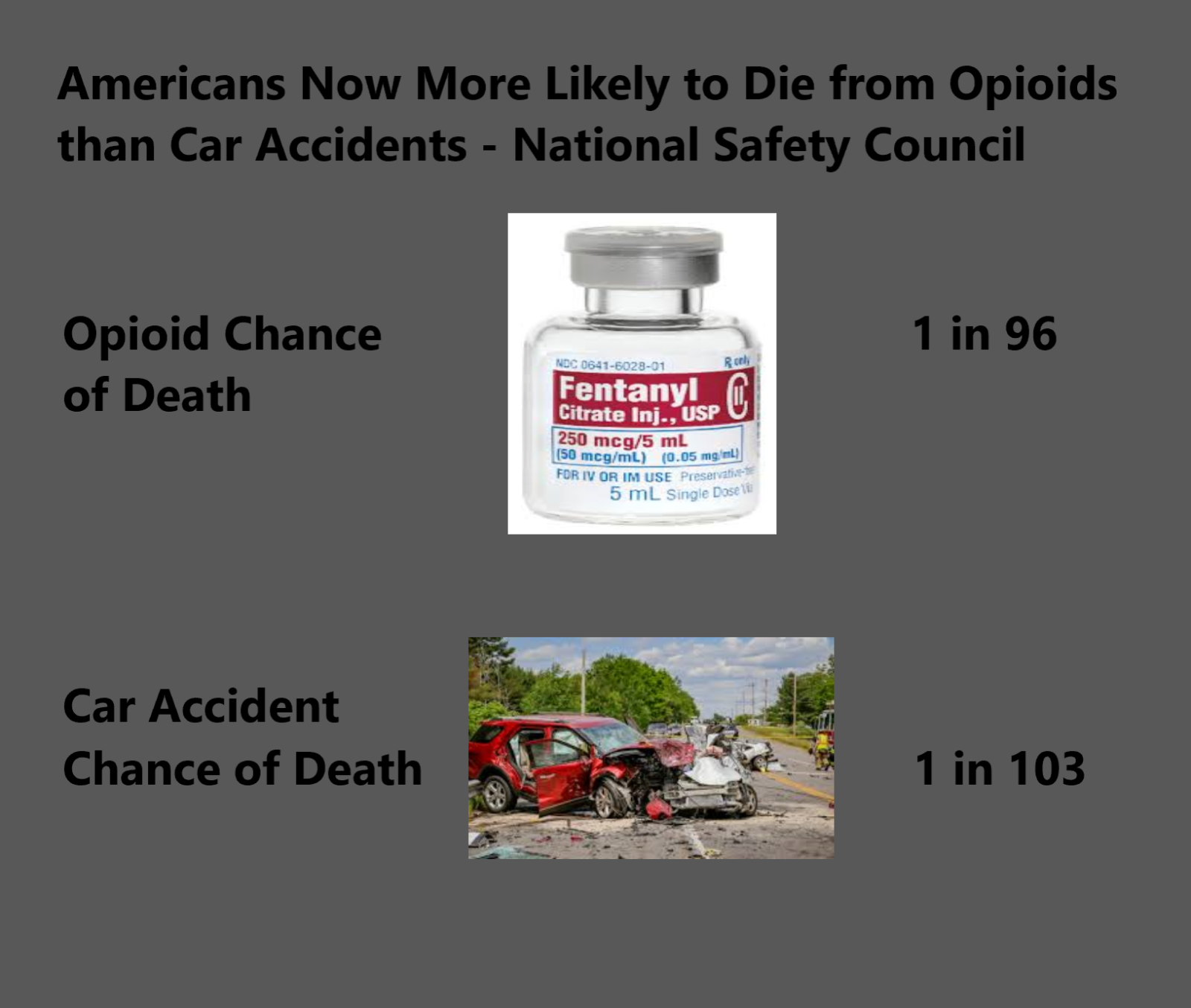 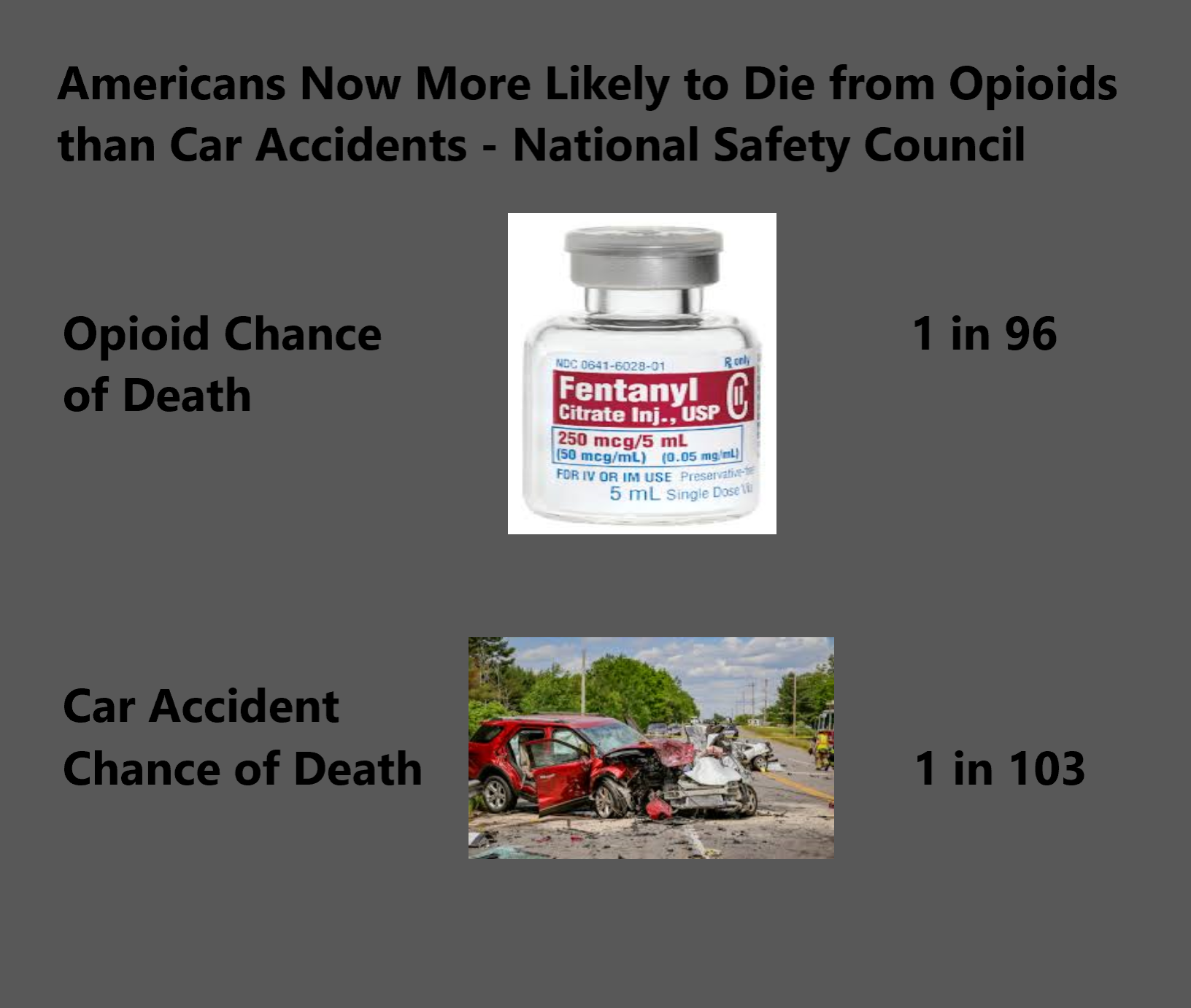 According to the National Safety Council, preventable injury deaths have increased by 96 percent since 1992

This article original appeared on The Rolling Stones

For the first time since the National Safety Council started tracking preventable injury and fatality statistics in 1913, Americans are more likely to die from an opioid overdose than in a car accident.

The NSC calculates the “Odds of Dying” based on statistical averages, dividing the one-year odds by the life expectancy of a person born in the year of their current analysis — in this case 2017. Heart disease, cancer and chronic lower respiratory disease held the three top spots (with one in six, one in seven, and one in 27 odds respectively) followed by suicide with one in 88. Opioid overdose was the fifth most likely, and the most likely in the category the NSC calls “preventable injury deaths,” with one in 96 odds. Motor vehicle crash deaths followed in sixth at odds of one in 103. Also notable, gun assault was the eighth most likely cause of death, with one in 285 odds.

“For many Americans, opioid misuse still feels like an abstract issue,” Maureen Vogel, spokeswoman for the National Safety Council told Rolling Stone in an email. “They don’t really believe it will touch them or their family. These data show that’s likely not the case.”

In 2018, unintentional injury, which includes overdoses and car accidents, was found to be the leading cause of death in the U.S. for people between the ages of one and 44, nearly twice as high as cancer and heart disease combined — based on data from 2016.

The increase in overdose deaths is significant enough that it lowered the overall life expectancyfor Americans, along with an increase in suicides, for the third year in a row, according to the Center for Disease Control’s National Center for Health Statistics analysis of 2017 deaths.

All of this points to just how far-reaching and critical the opioid crisis is in this country, with deaths continuing to rise, becoming one of the leading causes of death in the U.S., and now statistically likely to kill 1 in 96 Americans. Synthetic opioids like fentanyl have often been called out as a major factor in this escalating crisis, officially surpassing heroin as the drug most commonly associated with opioid overdose deaths, according to the CDC.

If you or a loved one is struggling with Opioid Addiction please do not to hesitate to reach out to us at 484-254-6780 or email: intake@phoenixrecoveryproject.com. We will conduct a free assessment and referral based on needs.

Get help for you or your family member now!

Call Us. Email Us. Submit an Inquiry.

Ann Gugliuzza
01:15 16 Nov 18
I highly recommended the Phoenix Recovery project as a trusted resource for those seeking treatment. The knowledgeable staff and facility offer their clients the best care possible and the skills to make the crucial steps to a drug-free life.

Cathy Conner
01:07 16 Nov 18
This is a wonderful facility a bunch of caring, supportive guys that truly want to help. I would recommend Phoenix Recovery to everyone.

Michelle Brady
00:52 16 Nov 18
I have total confidence in PRP. You can be assured that your child will be in a safe place and receive the proper guidance he would need for a successful recovery.

Jillian Keaveney
00:45 16 Nov 18
Such a great environment for those trying to recover. The owners are caring people who are dedicated to helping others.

Paul Zanaras
00:25 16 Nov 18
Such a great program and caring people who are passionate about recovery, highly recommended!
See All Reviews